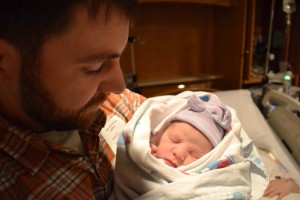 The expectancy of new parents waiting on their first baby — there’s nothing quite like it. So much excitement; so much uncertainty; so much naivety. That was us. Totally unaware of how becoming parents would completely change our lives. In February of 2012, we were eagerly awaiting the arrival of our first child. I was pregnant from head to toe and completely uncomfortable. Ten days of bed rest were some of the longest days of waiting in my life. I just wanted to meet my sweet child and find out if I had a son or a daughter. It seemed as if he or she would NEVER come. But finally, one day after her due date, on February 13, 2012 (just one and a half hours shy of being a Valentine baby and sharing her daddy’s birthday) our sweet Sophie girl arrived. This warm day in February, we began a part of our race here on this earth that has changed us forever.

From her first moment, Sophia was not what I expected. You see, I was expecting a boy to pop out. No, we didn’t find out the gender, but I was convinced she was a boy. When she arrived, I exclaimed, “Oh! You’re a girl!” Please don’t get me wrong — I could not have been more thrilled to have a daughter. But I was surprised. Then, my sweet girl was quickly taken from me because her breathing was labored and shallow. After receiving some oxygen, she perked up some, and her sweet, warm, pink little body was returned to me for our first cuddles. Oh so sweet. Yet, during the rest of our time in the hospital, Sophia continued to have some difficulty breathing off and on. By the time we were due to check out, she seemed to be doing well. As naive new parents, what did we know? Obviously, exactly what every new parent knows — nothing!

Sophie’s first weeks were both challenging and frightening for us. Day after day and night after night we had difficulty with her feedings, and she continued to have difficulty breathing. Her breathing was so raspy, a horrible snorting sound emanated from her mouth. Any time we laid her down, she began this rasping, snorting sound. Was she struggling to get enough air? Those days and nights were terrifying. We had no idea why she seemed to be struggle for each breath. Finally when she was 8 days old, we rushed her to the emergency room during a particularly bad breathing spell. Of course by the time we got there, she had settled down and was fine. Even after several tests, the hospital could find nothing wrong with her.

After a short stay at Nationwide Children’s Hospital when she was just 12 days old and many visits to the pediatrician, Sophie’s issues began unfolding in more clarity. Sophie was diagnosed with severe Gastroesophageal Reflux Disease. She was put on an acid blocker within the first months of her life. In addition, she was diagnosed with tracheomalacia, or a floppy windpipe. This, we learned, was the source of her noisy breathing. Her acid reflux would trigger heavier breathing during feedings, which would lead to choking and gagging, and the horribly raspy breathing sounds that terrified us. When we look back now at videos of her, her breathing is so noisy and frightening that I can hardly believe it became normal to us. But it did.

And so for a short time, things seemed to settle down. With the acid blocker, Sophie began to feed better and started gaining weight. She began smiling and cooing at the appropriate ages. By 3 and 1/2 months she was rolling over. Now that she wasn’t in such intense pain, she was a charming little lady. Everything seemed great.

But in June of 2012 she went for her four month well visit, and everything was not great. Sophie was diagnosed with hypotonia, or low muscle tone, commonly known as “floppy baby” syndrome. And she was floppy. At four months of age, she still struggled to support her head when in an upright position. She was not able to hold herself upright in a sitting position, even with support. And so, we were referred see an neurologist at Nationwide Children’s Hospital to investigate the potential causes of this problem. This day was such a shock to us. We were numb. How could there be something wrong with our sweet girl? Of course a quick search of the internet revealed so many horrific conditions which caused hypotonia. I struggled not to be overcome by the fear and uncertainty. It felt like I was drowning.

Just after this appointment, I poured out my heart in my journal:
“There cannot be another pain so great as that of a mother’s heart breaking. In a moment like this, my mind races and fights to understand how, why… Although God never put sin or imperfection into the world, he ultimately allows what happens. My mind can’t wrap around the concept that God might allow something to be wrong with my sweet Sophia. And if he would, then why? My mind knows all the churchy answers, but they don’t satisfy the heartbreak that I feel. What I desperately want is for my little girl to be normal, healthy, whole, happy. I don’t want her to grow up with pain and struggle. I just want a sweet, beautiful, healthy little girl, and my mind can’t wrap around the fact that she might not be. My mind struggles to integrate a God who grants our requests with the fact that bad things do happen in this world. And then God spoke to me as I gazed into my daughter’s face: ‘Don’t you know that I love Sophie even more than you do?’”

A mother’s heartbreak. It is so real. Only by God’s deep love for me and for my family was I able to stand in the midst of this trial. My mother’s wise words taken from Ephesians 6 came back to me, “Standing firm, even if only for a moment, is still standing firm.” Resolved to trust our Father, we began to pray. We were waiting to see what the Lord would do in our sweet Sophie’s life.

Even at a short distance of two years from all these events, I can see how much God had to teach me through my role as Sophie’s mommy. From the very beginning, motherhood has been one giant lesson in “you are not in control” for me. Thank goodness that lesson is followed by “your good God IS in control.” While Sophie’s first year did bring me much heartache and fear, it also brought me much joy as I learned to let go of my need to control everything. (Yeah, I’m still working on that one.) She was developing on her own timeline. And it was hard seeing her in comparison to other children her age. The comparison game is a dangerous one. I remember our pediatrician telling me that no matter how all of this turned out for Sophie, that we would still enjoy each moment in her life. It seems simple and even kind of silly that I needed to hear that. But it was freeing to me. I’m such a planner. Things happen according to schedule in my life. Or at least they used to. In Sophie’s developmental timeline, I had to, well, throw out the timeline. In doing that, we got to enjoy each of Sophie’s big moments, no matter how “late” they might be. We found that just because she wasn’t “typical” that didn’t mean that we couldn’t enjoy her. (Imagine our excitement as she finally began to crawl!!) Again, it seems silly, but if you’ve ever been through something like this, you know it’s not silly. The possibility of a child with a life that is “not typical” is hard to swallow. At this point, there was still SO MUCH uncertainty about her future. Our neurologist had not ordered any tests and was just monitoring Sophie to see how she developed up to her first birthday. So we knew nothing. And we tried to walk in faith believing that there was nothing to know. Call me hard if you will, but there’s a big dose of acceptance that needs to be swallowed in a situation like Sophie’s. When your new child, your first child (you naive parent, you), turns out with a prognosis other than what’s expected, acceptance is most definitely a real process. It wasn’t about loving her, it was about letting go of my need to control everything, and of my illusion of a perfect life for my child. My love for Sophie never wavered. But I had to come to terms with the fact that God’s plan for her life might look different than mine. In spite of the uncertainties about her future, Sophie was (and is) my precious treasure.

Many times through this first year, I struggled and wrestled with the incongruity of what God seemed to have for Sophie compared to what I had had in mind, in my “perfect life,” you know. (To be totally transparent, this is still a struggle I have at times today.) Instead of seeing a perfectly developing child, I watched my sweet infant child with the talons of our fallen world digging into her life. Sophie didn’t do anything to deserve being born with such a struggle. She didn’t do anything wrong to deserve for life to be such a fight from right out of the gate. Ah, the shortsightedness of emotions. Three years later I can see the beautiful way that God has chosen to glorify himself through Sophie’s life. What a privilege that has been bestowed upon her. Do I wish pain for my daughter? Of course not. But do I recognize what suffering and struggling can produce? Yes. A resounding yes. I was not spared pain and struggles growing up (nor as an adult, as Sophie’s mommy), and those trials have helped shape me into who I am today. I would never want to deprive Sophie of the shaping needed for her to become a woman of God. Ultimately, I find that it comes down to trust. Do I trust the Lord with my child? Do I believe the words that he spoke to me that afternoon after her four month check up, that he loves her even more than me? Do I trust in his good plan for her life? I do. That doesn’t make any of this easy, but it gives me oh so much hope.