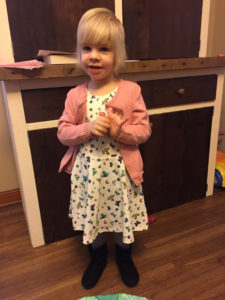 Well, the day has finally arrived. It’s the first day of kindergarten registration, and I’m not going. I’m sitting on my couch in my lounge pants with my box of tissue, crying my eyes out. Ironically, I’m sure there are many other moms sitting on their couches this morning in their lounge pants crying their eyes out for the complete opposite reason — they’ve just registered their baby for kindergarten! It’s an emotional decision, no matter which choice mama makes.

When Andrew and I began this discussion process about kindergarten, we were in pretty different places, but as we spent time processing, praying, and talking with many people about our decision, we both had the same idea running through our minds when we finally sat down to discuss this last night: It will not do any harm to give her another year to grow and get ready. While, on the contrary, sending her too soon could set her up for struggle in her academic career. I love when God does this — brings two people to the same page in an important decision.

I have agonized over this decision. Being an educator myself has been both a blessing and a curse. School is, to me, about academics, because I teach high school. (Although in practice I do teach A LOT more than academics to my high schoolers!) But the general notion of school is that it has to do with your intelligence and your learning. And this is why I’ve struggled so — Sophie is completely ready academically for kindergarten. All of her teachers agree that she probably has more academic skills than some little ones who will start kindergarten this fall. Letters, sounds, shapes, colors, numbers and counting, she’s got it. So if she’s academically ready, why not send her??

If you’re new to Sophie’s Story, you may not know that she was born with a condition called hypotonia. It’s not a syndrome, but usually an indicator of a syndrome. In spite of much testing and many different types of doctors, we’ve never found a cause for her hypotonia. She has no known syndrome that we’ve looked at. But she does still have hypotonia. She will always have it. And it can be linked to just about every delay she has experienced.

Hypotonia is a condition of the muscles in which their tone is lower than a typical person’s muscles. I picture it like this: a typical muscle is like a tight, thick rubber band. It is strong and can hold more pressure than a long thin rubber band. Sophie’s muscles are more like those long thin rubber bands, or ones that have been stretched out and lost their tautness. It’s nothing to do with strength; it’s the physical structure of her muscles. When Sophie was a baby, hypotonia caused delays in her gross motor skills like sitting up, crawling, and walking. It also caused her delay in speech, because, even though we don’t realize it, there is great muscle involvement in our speech. Now we see it more in her fine motor development – handwriting, drawing, opening packages and using silverware, dressing and undressing, toileting needs, etc. In addition, because of her speech delay, we see some delays socially. Sophie didn’t learn a lot of social skills at the typical time because she was not able to speak. On top of that, she’s most definitely an introvert.

The educator in me revolts because I know that the purpose of Sophie’s IEP is to remove the barriers that could keep her from being successful academically. Her barriers are physical, and we could have accommodations in her IEP that would allow her to go to kindergarten and be successful. But, as I said before, Sophie will always have hypotonia, and we can never be certain when she’ll be able to master a given skill. If we send her to kindergarten too soon, while her IEP can help her succeed, we’re starting her course for the next 13 years, and thereby giving her less time to succeed at those lingering delays before they become more noticeable to other children. Please don’t think that’s shallow — the way Sophie’s peers perceive her will impact her development, and the way that she matches up to her peers will also effect her own self-image. We want to send her to school as able as possible. So while she is completely academically able, Andrew and I agree that she could only benefit from more time to catch up in some physical abilities, to grow more independent, and to continue growing socially.

Although I really do think this is the very best decision for Sophie, there is still sadness in it for me. I’m struggling to identify where that sadness is even coming from. I feel like I should just be so glad for such an awesome all-day program that she can do next year at preschool. I guess I’m coming back to the realization that acceptance is always a process, at every stage in the game of special needs. I struggle very much with people who misunderstand Sophie’s needs and think that she has mental impairments. I struggle knowing that others may assume she’s not going to kindergarten for intellectual reasons. (Hence my overly lengthy description of our reasons.) But no matter the sadness and the struggle for me, I choose to do what I think is best for Sophie. In my heart, I trust that God sees our year ahead and knows all the things about it that I cannot possibly know. We’ve committed our decision to him, and we’re trusting that he will bless Sophie’s life. 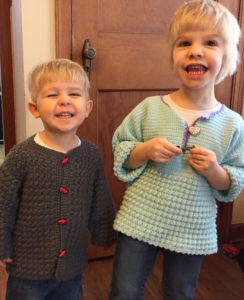