In my last post I came to you with much enthusiasm over Sophie’s growth in handwriting. She’s doing so well with her letters! It’s thrilling. This week I can’t say I have a heap of enthusiasm, but I do have a heap of cuteness. 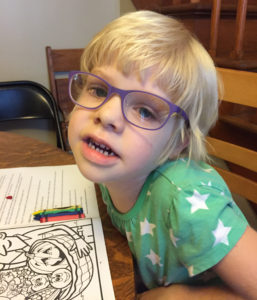 We knew that this was likely for Sophie from the time she was about 9 months old, when she was diagnosed with nystagmus. This is an involuntary darting or shaking of the eyes. And it is caused by, you guessed it, improper muscle coordination from the brain. It’s the million dollar answer for the myriad of Sophie’s issues. Of course her brain has adapted to the way her eyes move, so she doesn’t see things constantly shaking, but nystagmus does impact her vision somewhat.

For one thing, her ophthalmologist tells us that she will never 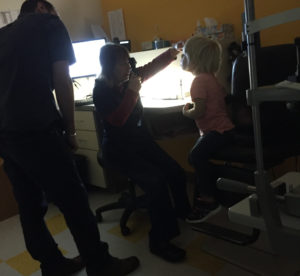 have great depth perception. (Perhaps an explanation for her abundance of graceful movement lol — she falls all. the. time.) And now her eyes are not really working that well in unison because one eye is nearsighted, and one eye is farsighted. So one of her eyes can probably see better than the other, and the brain will learn to depend too much on the good eye, allowing the bad eye to lag even more. So, to try and get her eyes working together as much as possible, she has to wear the cutest glasses ever.

Sophie is super awesome at losing things, so I’m expecting that the search for the glasses will be everlasting and epic. Fortunately, she’s not terribly destructive of her possessions, though her abounding grace aforementioned does sometimes result in the destruction of her property. So having glasses is bound to be lots of fun. But at least she’s cute, and she can see. 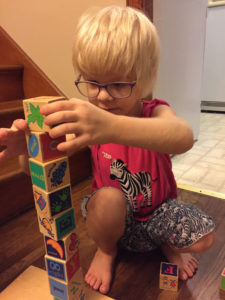 So far she does not really enjoy wearing the glasses, but she does ok if she forgets that they are on her face. I know in time she will get used to wearing them. 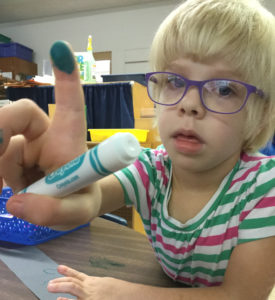